Lost and Found. And Lost.

Well, who would have expected such a muddle?  To start from Esposade metro station would be easy, obviously, and make for a nice, prompt start and finish.  Unfortunately, that did not take into account hash pathfinding qualities.  Wrong path-finding, that is.  By the time the car containing Mega Tongue, Judge Red, Droopy and me completed our little tour of the Maia hinterland to reach the station, the hares and respective other halves were already on the phone to Master Baker who had contrived to end up somewhere around the docks, having wisely left the club without any idea of where to go.  Just then I got a call from the absent Hard Drive to inform me that Snorter was lost somewhere and about to give up.  His voice was full of urgent dread, as though Snorter was about to give up life amid the tangle of featureless motorways between Porto and Maia, but it turned out he meant just the hash.  Mind you, without a hash, what kind of life would it be...?

All this delay served to make Mrs Slocombe, when he turned up, appear not to be late.  Clearly shaken by this, he declared that he'd forgotten something.  His dog.  He was only five minutes away, he reliably informed us, and off he went again.  Five minutes, my arse.  This is Mrs Slocombe we are talking about.  Whilst he was away, Snorter finally arrived, then, half an hour later, Mrs Slocombe returned, complete with furry friend, at exactly the same time as Master Baker with the search and rescue team that had been sent out for him.

Right, once all present and correct there was a hash to be run.  Having stood around waiting for more than an hour there was a certain stiffness to be shaken out but the route quickly did the trick.  At least we had finished waiting around for lost hashers to find us.  It was a short run, but found some very nice spots, especially the little park area beside the river Leca at which we stopped for a pit stop.  We got back to Esposade safe and sound in just over an hour, chilled for a while, then proceeded with the down-downs for the hares, Gender Bender and Ladyboy.  There were no birthdays or namings that I was aware of, so it was over to the R.A. for his bit.  R.A.... Um, where is Droopy? someone enquired.  Good question.  It appeared that he had not made it back, but no-one had noticed.  Searchers spread out in various directions.  Snorter drove towards one of the villages, whilst Pimp my Dongle and I checked a few routes without success before heading back to the group.  When we got there after ten minutes or so Droopy had been located, but now we had lost Snorter again.  Of course, this rambling tale had a happy ending and we were all reunited eventually, drinking lager out of piss pots in a cold car park like normal people. 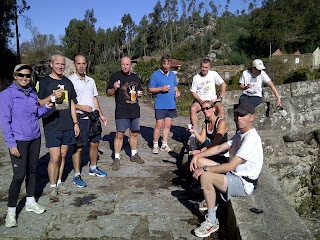 Posted by Porto Hash House Harriers at 04:06 No comments:

Somewhere, in a valley far, far from here...

After a three week gap we were at it again last Sunday, with the relatively lengthy drive to Amarante for this outing courtesy of Master Baker and Bow Job, the latter a hare for the first time.  We parked beside the river on the opposite bank from the historic centre and began by making our way along a wooded path just above the water.  It was all terribly picturesque, so naturally we turned away and headed uphill, beneath the concrete bridge carrying the main road tino one end of town and onto the road.  As soon as we began to rise, it became evident that Mrs Slocombe was going to live up to his name in fine style, making us all yearn for the speed of a Walkie-Talkie to hurry things up at the back.  On the end of his lead, Pussy was bored, with the only relief when they eventually crested a hill.  It was a bit like watching a victorian era roller coaster creeping and creaking on cogs to the top of a peak before tumbling down the other side, only to grind to a near halt as it levels into the next incline.

Vinay Prabdhu was back with us after a two year spell in America, where, he revealed, he got into swinging - the conditions over there just leant themselves to it, apparently, and he managed to swing both ways.  How disappointed we all were to discover he was talking about cricket.  After all that, it was remarkable that he managed to get away with the name Dr Know-All at the end.

Also back for a rare visit was Rubber Man, who demonstrated, first his underwear, then some old-fashioned hash rule-breaking with short cuts, ignoring regroups and sundry other crimes for which he was duly punished later on.  By contrast, virgin George, Gnasher's boyfriend over for a visit, showed his military discipline by sticking perfectly yet ludicrously to the snaking ornamental paving on the final run-in.  As he could simply have run in a straight line, he appeared as though he had played one of those drinking games that leaves you looking like a wasp fished out of a pint of beer.

It was beautiful in the centre of town, the autumnal colours reflected exquisitely alongside the old bridge and buildings so photogenically that even a rabble of hashers anticipating alcohol could hardly fail to be impressed, and a wonderful little old watermill, still with working wheel, was a charming little detour, but not for the curmudgeonly Master Baker who had decreed it unworthy of his interest and merely waited for our return with Mrs Slocombe and the not-as-knackered-as-usual Pussy.

After Vinay was named, various people were punished and Spanker celebrated her 240th run, the rain hurried us into the cover of the cars before a pleasant bash in an old tasca overlooking the river, on which a fisherman appeared slowly to be contemplating drifting to his death on the rocks.  Unfortunately for him, the rapids of Amarante are not quite Niagara-esqe so he eventually drifted back, looking even glummer.  Happy days.
Posted by Porto Hash House Harriers at 11:18 No comments: