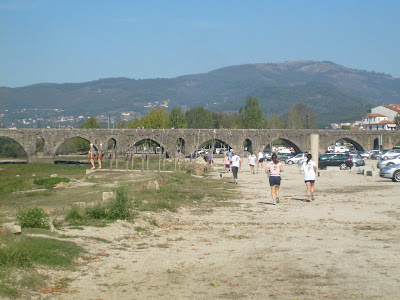 We were lucky with the weather when PH3 trotted up to Ponte de Lima for the last weekend of October, as temperatures rose to around twenty and blue skies gave the perfect backdrop to one of the loveliest areas of the Minho. Spanker and I were alone on Friday night, having done most of the setting (or so we thought) for the two hashes that day. We had a most pleasant evening in the tapas and straightforward bars that make the town feel decidedly Spanish and wonderfully vibrant. We knew we both had a bit of work to do the next day, but not so much as to inhibit a good night out. I had to fill in the gaps I'd left in case anyone should arrive early enough to stumble upon them (which of course no-one would do since we were the only ones there already); Spanker and co-hare Walkie-Talkie had set their hash completely, only to decide at the end that it would be better done in reverse. Still, that would be easy enough.

Come Saturday morning we found oursleves on our second 'wait for Noel' - this was something of a motif for the weekend, and as it turned out, not only for us. By the time I had finished mine, taking longer than I had expected, the first of the hashers had started to arrive and before long everyone due to hash on Saturday (not too many, as it happened - the curse of Plunger struck again) was ready and waiting to go. The meet time of one o'clock came and went, but still we were without Spanker, or W-T, who was not hashing but due at his Uncle and Auntie's for lunch. The clock ticked and ticked; we kicked our heels and waited. At five to two Spanker called, saying that they were five minutes away. From the car. But the car was parked no more than ten minutes from the hotel. Half an hour later, like a scene from Cagney and Lacey, a car screeched to a halt by the hotel and out leapt Spanker, flying into the hotel from which she soon re-emerged, clad to hash, whilst her partner sped off to meet his destiny - big trouble with Auntie and Uncle for being late (I presume they had met Noel before, but anyway).

So, finally, we were off.

The hash went from the hotel and included a quiz (pre-warned), based on observation, but things did not bode well on that front as everyone blithely trotted past the first historical information board. There was also a competition to collect the most green strings, in which Little Voice utterly trounced all opposition to take the prize.

In the warm sunshine we made our way through the old centre of the town before heading to its outskirts, the famous Ponte de Lima wine co-operative (funnily enough, most hashers did observe that detail), and the cattle market as we turned back along the riverside heading for the Roman bridge. On the other side of the river we stopped for spritzers on the lovely wooded bank looking back at the town, hazily tucked beneath the rising hills. The pit stop came at a convenient time for Tigger, who had given himself a chronic stitch by hurtling like a cartoon tiger around an ornamental garden that he found aesthetically pleasing (a very good spot, he declared upon entry) but physically discombobulating. Another half hour or so round mossy lanes and passages brought us to the high road bridge above town, and down to a finish at about an hour and twenty-five, a decent time for a hash that was well run by all.

Down-downs saw Joe Dyer named as Master Baker and then we retired to rest and oblute before dinner. Or rather, before waiting for Walkie-Talkie so that we could go to dinner. When we did, it was to feast upon great quantities of grilled meat and plentiful servings of local wine, being joined by some of the latecomers as we did so. Spanker won the observation quiz with a magnificent total of three right answers, out of about twelve, and to celebrate we headed to the tapas bars, so that the newly-arrived Hard Drive could eat and the children could throw bits of bread at passers-by from an upstairs window. All was going fine until Claire found English cider in a local bar, at which point it all threatened to get a bit messy.

Fortunately, we had an extra hour, a fact of which Hard Drive informed the entire hotel floor when he arrived back at about three a.m.. After breakfast the next morning we - our numbers swollen overnight (I said, numbers) - assembled outside the hotel ... to wait for Noel. When he arrived we made a rather tricky way to the start and set out on one of the barmiest hashes in some time.

The cause of their late return to base the day before had been the fact that they had got lost. On their own, already-set, hash. They had even considered, with Baldrick-like cunning, that we might just follow signs in reverse ('Run away from the signs! If you see a sign, run the other way!"), but fortunately thought better, but this did mean that at various points we could have gone on one of about three hashes, as most of the signs were still there, regardless of whether they were still in use. As it happened Inspect My Gadget did indeed embark on a couple of these alternative hashes, which made life interesting, as did the hares getting lost yet again on a couple of occasions. There were even lamp posts that had contrived to end up with arrows on both sides, each pointing the opposite way. We also managed to pick up a little dog, whom the children christened Fluffy, and who did almost the entire hash with us. It was stunningly beautiful at times, mind, and the pit stop, at a tiny bar in a converted watermill beside a lovely cascade was an absolute gem.

Down-downs saw Claire christened Ladyboy (young Tigger's suggestion of Gagging Cock was passed over with many a lip having to be painfully bitten) and then we headed to bash on Rojões a moda de Ponte de Lima, complete with excellent Papas do Serrabulho as a sauce for those who wanted it. Flasher was unimpressed, but the rest of us thoroughly enjoyed it to round off an excellent weekend.


Posted by Porto Hash House Harriers at 08:47 No comments: