Jingle All The Way - a Snorte and Big Stick production

...And so it is Christmas. Another year of hashing is over, with the usual bang of the Jingle Bells hash and bash to send us into our festive break. Most of the twenty-six runners met at the Club, arrayed in various festive guises, although Tongue Fu seemed somewhat confused as to which festive occasion she was marking, appearing in a bunny outfit ('Could someone help me attach my tail?' or words to that effect she was heard to say; I believe she did not lack volunteers).

Needless to say, we failed to reach the Gaia start point as a complete convoy, Family Jewels having strayed at some point, but when we were together, we set off for a prolonged circuit of the park beside which we had left the cars. Re-emerging at the entrance, debutant Alex Mutter (8), having hurtled about so far, checked whether it had finished already, only for the withering response of big sister, Anna, veteran of one hash, along the lines of 'no, of course not - there's ages to go yet, stupid.'

On we went, past El Corte Ingles and into the west side of town, reaching a little park in the middle of which Squirrel and Gnasher awaited with white port, tonic and a selection of nibbles. When we were eventually persuaded to shift ourselves once more, the route, surprisingly, took us away from home and towards the port caves. Okay, we thought, having reached the new Yeatman hotel, it'll be on up here, staying high and heading back, but no, amid much gnashing, wailing and grumbling, we were sent down, and down again, to the river front, and then left, yes, west, in the opposite direction from the cars and with the clock reaching two hours' running time. Past the bars and restaurants of Cais de Gaia we went until rounding the corner to see Squirrel and Gnasher once again, providers of alcoholic sustenance, in this case the down-downs for a linear hash that no-one saw coming.

Eventually, we repaired to the British Club for Christmas Dinner, plentiful lubrication, the prsentation of awards and Tim Chambers' excellent Christmas quiz (well, not that excellent, actually - rather flawed I felt, with silly questions and stupid aswers. No, I didn't win. I blame it on my team mates).

2011 will begin with Tichy Percy and me shaking off your cobwebs somewhere outside town. See you all then.
On, on,
Mark/Plunger
Posted by Porto Hash House Harriers at 07:28 No comments:

It was a miserable enough morning when just a select few turned up for Titchy Percy and Gender Bender's hash in Maciera da Maia, but Mrs Slocombe, running late from the beginning, added to the agony by, courtesy of TP's dubious directions, keeping us waiting in the rain in the village square for almost an hour. Oh well, we all thought, never mind - apparently, the start is just around the corner. All we have to do is follow the hares' car ... oh. Off they sped, leaving two cars to potter into the distance for a couple of kilometres.

In time, though, we re-assembled beside the fast-flowing, swolen Rio Ave and a splendid old stone bridge, watched over at either end by water mills. We headed off beside the river, through sodden fields, an overgrown copse and to a steep, slippery bank which brought us up, in typically pointless hash fashion, to the road we had parked just down from. We crossed the river over a high road bridge before heading into village streets, back alleys, fields and woodland. Amid one of the first woods, I found myself left behind at a checkpoint (okay, I might have taken the opportunity for a quick pee - I think it's safe to own up now) and completely unaware of the direction to take. After some shouting and scrabbling, I followed the trail of Pussy/Oliver's fur on the gorse and brambles (why is he moulting in December? the question was raised; the down-down was awarded) and caught up.

Shortly afterwards, Mrs Slocombe took a mud bath, or at any rate, one leg did; then Spin Doctor ludicrously tried to construct for herself a bridge over a muddy field using a four-inch twig. We pit-stopped beside some surprisingly late fruiting vines, bursting with red grapes, then followed the hares' route the previous day down to the river bank and back up when they could not find a way over the river. A long but satisfying run-in took us back over the old bridge, finishing at around two hours, after some determined running all round for twelve and a half up-and-down kilometres. We were wet, but well set up for the Jingle Bells hash...
Posted by Porto Hash House Harriers at 05:45 No comments: 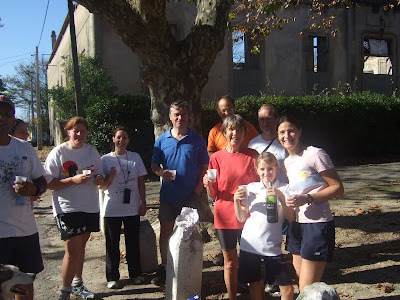 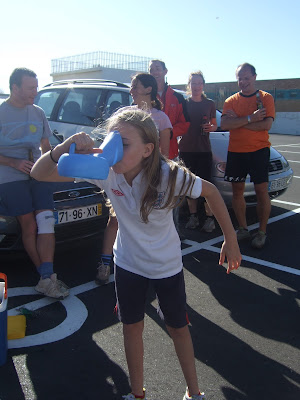 Posted by Porto Hash House Harriers at 05:39 No comments: