PH3 get taken up the Douro 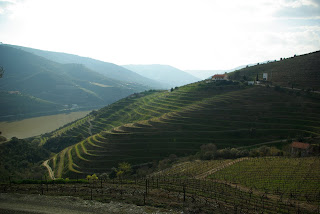 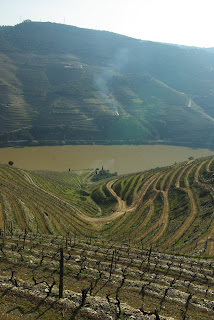 The long-awaited 350th weekend was met with wonderful weather to complement the fantastic scenery. In the end, fewer than expected made it, but numbers were healthy nonetheless and for those who were there it was certainly memorable.

A small group made it to Sabrosa on Friday afternoon, with time to relax in the very pleasant hotel. Sadly, Inaction Man and Brunei Babe had had to cancel Friday and would be up the next morning. It was noted that hash accommodation has definitely moved up-market in the past couple of years. There was time to wander around the village (not difficult, really, as the time required was little more than five minutes), drink a coffee (yes, coffee - restrained bunch, we are), then get the beers in (ah, that's more like it), before realising that we had little time left for a shower before re-assembling to go to dinner. That was in a tiny tasca, in a village to which we would return the next day, but whose name I have temporarily forgotten, with a kitchen so small that, as Andy pointed out, you genuinely would struggle with the cat-swinging, were you so inclined. After a cracking meal we headed back to the hotel to test the bar and pool facilities - all in the name of quality control for the benefit of those coming the next day. After the slowest game of doubles pool this country has probably ever seen, featuring me, Never-a-Fokker, Whippit and Dave, everyone had lost the will, if not to live then to remain awake. So we went to bed.

The next morning afforded a leisurely rising, breakfast and various means of whiling away the time before everyone else arrived and we set off for the walk. Once complete, give or take a Big Stick or two, we drove off amid stunning scenery, to Quinta Nova, on the banks of the Douro about a winding hour away. Sadly, Inaction Man and Brunei Babe had had to cancel this part, and would join us later. Getting out at the Quinta we were reminded that Andy had suggested we be discrete with our packed lunches whilst there, as the owners had wanted us to eat in their restaurant. It was then interesting to hear the history of the place from one of the owners as we chomped on sandwiches before setting off on the marked trail. We got about half a mile and decided we'd found an ideal place to eat after so much hard work. Half an hour later we hauled ourselves up and carried on, up and down the terraced hills until we were faced with the dilemma of 'that way for half an hour more walking' or 'this way for five minutes more walking and on to port tasting'.

Half an hour later we arrived at a fabulous old solar for port tasting. Sadly, Inaction Man and Brunei Babe had to cancel this part and would see us for dinner later. The house, owned by an old friend of Walkie-Talkie's late father, was like a museum piece, a wonderful old place, colder than a witch's whatsits, and with a room laid with home-made meats and nibbles to accompany the wine. Dodger and Whippit led procedings and we all followed enthusiastically, supping our way through a range of fine ports from Nieport (thanks, Nick), Taylor's and Graham's. We listened dilligently to the expert information, wafted, sniffed, gazed sipped and rolled it over the tongue, then guzzled merrily. Those who wished to taste but not drink it all had a jug into which the dregs could be collected. At the end I poured it all into a bottle, which Liam, Monica and Allan (yes, he'd managed to make it for the booze) tucked into, sagely expounding its balanced qualities. What remained became the GMs Blend, for use at down-downs the next day.

We met for dinner a few (very few) hours later. Sadly, Brunei Babe had to cancel dinner, but would no doubt see us the next day, but Inaction Man appeared (hooray!). Dinner was another pleasant affair, and the rather unfocussed pool afterwards a highlight for those able to remember it. Several hashers burnt the midnight candle to its end, although, once again, my pool was the cue (sorry) to retire sometime before the hard-core.

The next day we emerged at the frighteningly early time of nine-thirty to leave for the main event, the hash (remember that?). Sadly, Inaction Man and Brunei Babe had to cancel and they would no doubt see us at some indeterminate time in the future. Squirrel was discouraged in her theory that Inaction Man had secretly 'done away with' BB whom we would actually never see again. Down we wound once more round the curves and contours of the valley, driving towards the Douro beside which we were to start.

Eventually, after the inevitable Varanda-related delays, we set off from the river beach at Pinhão, on a sometimes challenging but beautiful run/clamber that took us through the town and quintas, with fine views, steep ascents and descents, stories of fearsome dogs and a pit-stop for port and tonic at a chapel clearly reserved for hashers in distress. Running up and down schist paths proved quite tricky at times and more than one person felt glad to be doing it now rather than at the height of summer. When we made it back, after a good long run-in, Squirrel, in her car the whole time, awoke in time for down-downs that saw Harry Davis named Gender-Bender. We also said goodbye to Alan Never-a-Fokker Roberts, returning to the UK almost immediately. Your hash avoidance down-down is in storage, N-A-F.
After a bash at the local fire brigade headquarters (sadly, Inact - oh, you know what I'm going to say?) it was (for some of us) a sleepy journey back. Big thanks to all those involved in the organisation, and, if you weren't there, well at least you can buy the t-shirt!
On, on!
Posted by Porto Hash House Harriers at 07:02 2 comments:

Images from the 350th weekend (Saturday walking and port tasting 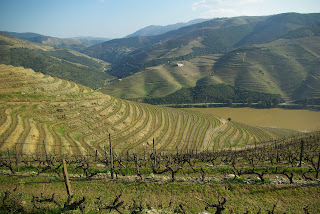 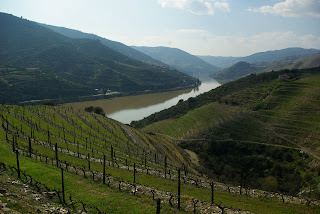 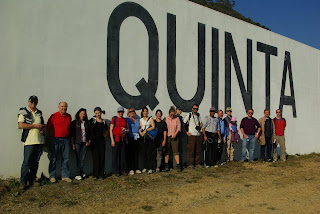 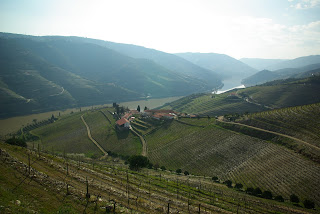 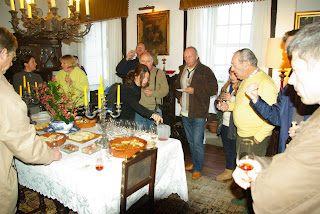 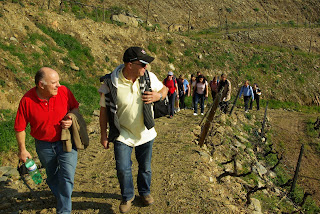 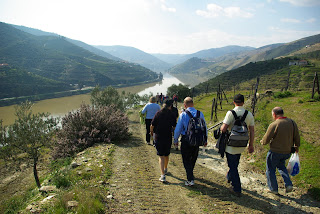 Posted by Porto Hash House Harriers at 11:30 No comments:

As the country huddled away to avoid the wind and the rain last Saturday, Snorter and Hot Pants were getting lost - sorry, temporarily misplaced due to the GPS - in Serzedo, laying out the trail for Sunday's hash. As we arrived at the starting point, the wind having dropped overnight but the cold, slicing rain beginning to come down heavily, we were startled to see the roundabout at the end of the muddy track being used as a racetrack/skid course for the local special needs school (I may have made that last bit up - they did not look that bright).
"Honestly." Tongue Fu and I rolled eyes at one another, tutting. "Ridiculous." The rain began to drip from my eyebrows as my feet sunk into the mud. Far better to do something mature and sensible, like us.
We set off at a clip, following Snorter's encouraging "0n, on" only to be called back after a hundred yards. Apparently, "on, on" meant "checkpoint" and in the end we headed in the opposite direction. It was a tight course, winding round and around the area, crossing itself a couple of times and showing Snorter's experienced touch. It was running at pleasing pace, without the need for a single re-group, and we made it back, after a wet pit stop, in about an hour and a half.
Having managed to lose Hot Pants and Hard Drive - and thosae following them - when they followed Monica back to her house on the way to the start, they managed heroically to repeat the feat on the way to the bash, at Monica and Liam's regular chicken place. This came after incurring the mandatory down-down for the crime, after Snorter had been recognised for his 170th.
So, now we get ready for the big one - the 350th. Let's all take it up the Douro!
On, on!
Posted by Porto Hash House Harriers at 05:47 No comments: