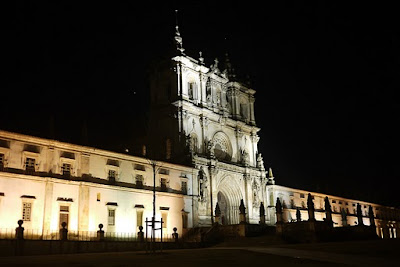 After all the planning it arrived: the 275th weekend, our first overnighter since the Douro hash last March - far too long, but certainly good for building up anticipation.

On the Friday night, fifteen of us hurried through the monsoon rain to reach Alcobaça for the start of it all. Our nice, little hotel afforded fine views over to the monastery, or, for the Mutters, Horny and children, over a concrete roof and drainpipes, but we weren't there for the rooms and so, once everyone had arrived, it was off to a local café and then to dinner, at a great little place serving copious amounts of good but cheap food and some red wine that was not so much well aged as requiring a zimmer frame and constant reminders. Alex Mutter resisted all attempts by the waiter to tempt, cajole and, finally, bully him into eating his vegetable soup, but by the end of the meal was quiet for probably the only time over the weekend - laid out asleep over a couple of chairs. Outside, we drank beer in the drizzle in front of a buzzing local café bar that played old eighties classics and was so full of smoke that it could have been on fire.
The next morning saw a slow start as we waited for everyone else to arrive. The slow start was welcome for one or two after the night before, and the late congregation in the hotel lobby inevitable for a bunch of hashers. We began without the latest arrivals (would you believe that Walkie-Talkie, Mrs Slocombe and Hot Pants were among these?) and embarked on a walk-quiz around the town, in pairs determined by random allocation of romantic figures (Romeo with Juliet and son on). My partner, Molly Costello, proved somewhat elusive, so I made my own way round, rather haphazardly collecting answers. We all criss-crossed one another, generally going in the right direction. And then there was Titchy Percy and Bunbasher, moving with the co-ordination of a wasp you've just just turfed out of your pint on a summer afternoon. Answers were given before dinner, with the winners being ... well not me, so who cares? Dinner was another pleasant affair, followed by games in the bar led by the young Mutters. Alex's 'Who's in the Bag' efforts were memorable, as was Bunbasher's attempt to discover that he was ?Hello Kitty'.
Eventually, we came to the hash itself. After a bit of a drive, we came to the start point, amidst the rain, which had lessened (and continued so to do) since breakfast, but which had seen of several expected hashers pull out (hang your heads in shame, wimpy hashers!). Soon, we were heading up, and up, through thick, spiky undergrowth ranged on the steep, rocky ground of the big hill above the cars. Alex's regular inquiries as to whether we were nearly at the top failed to bring the top any closer, but did elicit some very un-maternal comments from Horny. His observation that you wouldn't get Anne Widdicombe doing this brought unequivocal agreement: never has a truer, or more random, word been said. When we reached the top, and a path, shrouded in thick mist, we all sighed with relief: now for some running, we all declared, possibly with the exception of Walkie-Talkie. So we ran, to a pit stop of bubbly, strawberries and no view whatsoever, then ran again, for about two minutes until the descent began, through thick, spicy under (and over-)growth ranged on the steep, rocky ground of the big hill above the cars. For a moment there was a path again, and off we scampered, but no! said the hares, we'll have no running here - go through these bushes. Bugger, we all muttered, and went through the bushes. At the end, reaching an on-back replaced from the beginning, the front-runners left for home, leaving those following to compete in a three-legged race home, won by Spanker and Anita.
Before the bash we voted for the most resplendantly pink-bedecked hasher, and despite vaguely obscene efforts from Anita and Tony, this was won by Bunbasher, looking like Just Gay William. His prize was to wear a crown all through the bash, which greatly pleased him.
The bash itself was anexcellent end to an excellent weekend that will live long in the memory (and whose scars have proved fairly resiliant on my legs). Well done to Brunei Babe and Inaction Man for the great deal of organisation and effort that went into it.
Posted by Porto Hash House Harriers at 06:11 No comments:

Gender Bender stepped in at the last moment as a co-hare with Spanker and they took us on the short journey north to Guifoes for this one. We were joined by Hooker, on a weekend visit and looking as sprightly as ever, despite the exertions of the night before at Horny's fortieth birthday bash. The event did take its toll, however, with Horny herself absent and Big Stick and Pretty Vacant appearing somewhat fragile. The urgency of the fragility became apparent when they disappeared up a street as we got out of the cars to start. When BS returned he discretely told everyone that PV required the use of a random stranger's smallest room, so they had knocked on some door and asked to use the toilet.

Eventually, we were all ready, and set off past the eforementioned house, just to cement the bewilderment, no doubt. It was straight into the Sunday morning bustle of the village centre, wary eyes tracking us, cars and buses threatening to squash us over the cobbles before we headed away from the numbers, finding quieter streets, fields and woods. At one point we headed down a hill through some woodland and into a thicket that became increasingly overgrown with hacking brambles, leaving those of us who ventured deepest to emerge with bleeding shins reminiscent of ex-GM, Chalky. When it turned out to be an on-back, Inaction Man, like a tracker, foraging forward, returned to inform the next contingent that our wounds had been sustained in vain. As GM, however, I had to ask where the red string was and, on hearing that it was still in place, I had to instruct IM to go back into the worst of the brambly inferno, never mind the cost to his socks. He knew his duty. Without a word, he went back in.

Crossing the paths of at least three other hashes at various points, we wound a clever course round the area. Near home, Bunbasher headed back on his own route, in customary fashion - it was a case of 'we'll never get him back if he checks that way, so just let him go' - but on the right track Hard Drive was away, flying, a hundred yards ahead of the chasing pack. "Go on, Hard Drive," came Spanker's cry. "You can do it!" The trouble was, he still did not know where he was, even with the cards ahead of him. It was, perhaps, the worst sprint finish in hash history, but at least he could console himself with the sight of Bunbasher making uncomfortable progress over the churned field he had made his own, vastly more difficult, way back. Except he probably didn't see thet, either.

At down-downs it was revealed that this was Bunbasher's 250th, unknowingly marked by his 250th hash t-shirt, or what wasleft of it. Then, following a few beers, it was round to a nearby restaurant for another excellent value bash.
Posted by Porto Hash House Harriers at 05:13 No comments: