A touch of Autumn colour

As I look out of the staffroom window I gaze across at bare trees beside those still carrying gold and bronze leaves. The air is crisp, the weather changeable, and the hashing muddy. Autumn has seen some good hashes, excellent for runners, although numbers have been a touch restricted, perhaps a result of the drop in temperatures.

Bunbasher took us for a trot near Serzedo, starting from the gates of the riding stables past which we have run on a few occasions. The first hash was the circuitous route taken to avoid the newly-installed SCUT charges, but eventually we got to do some running, Bunbasher leading us away. As a somewhat impatient hare, he repeatedly called the way before the checkers had doen their job, but it kept things moving, everyone running at a decent pace. We revisited the rather eerie site of a planned but long since abandoned housing estate, running along the cracked and weed-strewn tarmac of its roads and the occasional shell of a building begun but left. We worked through the usual mix of fields, woods and lanes, moving about a very tight area before reaching home only to be so assailed by flies at the down-downs that we moved quickly to the bash without the usual degree of quaffing, but after arriving at the name Spin Doctor for Maria do Carmo.

The next time we were again south of the river, in Aguda, for a Horny/Flasher production that was initially notable for the fact that it featured - for the first time in PH3 history, we think - three generations of one family running, Anna Mutter joing her mum and gran. On a fairly short, urban run, on a bright, cool day, Anna did extremely well, sprinting away to lead us all home at the end. It was almost all done on roads, one short stretch through a patch of unpaved ground having been deemed sufficient 'forest' by Flasher. The sight, later, of a ten year old girl drinking in the middle of a ring of singing, beer-toting adults might have caused some social-service style concern to passers-by, but fortunately the alarms and sirens that sounded seconds later were for the local bombeiros, not an announcement of our imminent arrest.

Most recently, yesterday in fact, Big Stick and Walkie-Talkie took us north, to Labruge, familiar territory for many of us, and the setting for another good run, with all the expected features - sand, fields, brambly woods, country lanes and the well-known castro beside the sea. The weather, which had been so poor, and had nearly removed some of the signs, was good for us, the rain not arriving until we were firmly ensconced in the retaurant. We took a pit stop where the hares had the day before, in a little café, and it was noticeable how the signing deteriorated after what had clearly been a thorough reseaching of the café's ability to host a pit stop. The first checkpoint sign looked like it had been drawn by a two-year old with co-ordination issues, the next one had a smiley face inserted, and thereafter they clearly had decided that signs were an outmoded concept and that a do-it-yourself hash was the way forward. So we did it ourselves, winding up and down from the beach until emerging at the cars for beer in the sunshine and cool sea breeze.

Next up is in December, the first of two before a four-week Christmas break. Hopefully, the numbers will pick up over winter and we can bring them back up to the levels we've seen most of the year.

On, on!
Posted by Porto Hash House Harriers at 05:45 No comments:

Riding the Crestuma of a Wave (??)

Excuse the ridiculous heading, but one tries to be creative; likewise a hare, but, as we gathered at the riverside in Crestuma, with the hills of the Douro valley looming behind us, it seemed that Boozy-Woozy and Mrs Slocombe would have to be very creative to avoid a steep climb. Sadly, creativity appears not to be their strength, so up we trudged, and up, and up, running, clambering, scrambling, and - let's be honest - staggering towards a summit that seemed to be moving as we did. Squirrel rather magnificently gave up the ghost about a quarter of a mile from the top and scrambled back down again, possibly a more perilous task than ascending.
There was a good variety of terrain and the fifteen remaining maintained a reasonable pace, albeit drawing into two groups towards the end. In the end, a small group splintered off for a short cut, whilst the rest of us meandred round Crestuma, most spectacularly passing through the abandoned carcass of a huge old, brick-built, factory perched above a rattling stream like something drawn straight from an old school textbook or the pages of a nineteenth century realist novel. The finish came between an hour fifty-five and two hours five (pit-stop-free) and was followed by a bash at the local watersports club.
Posted by Porto Hash House Harriers at 06:53 No comments: 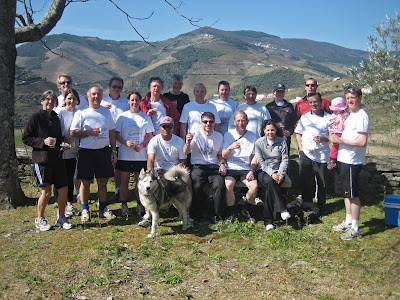 Posted by Porto Hash House Harriers at 06:58 No comments: